This month – with Artlands Victoria at its heart, and Artstate Bathurst following early in November – we’re focusing on regional arts and regional artists. 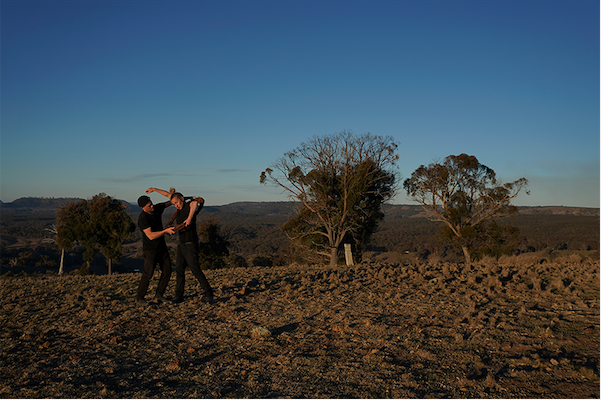 There’s so much going on across regional Australia right now to develop local independent practice. Aboriginal arts centres in regional and remote places have long supported First Nations cultural practice, respecting the knowledge systems that preserve language and lead to new thinking, experimentation and innovation. Key organisations across the north, west and centre such as AACHWA, ANKAAA, Desart and IACA support culture-first best practice, and the Indigenous Art Code maintains standards to preserve and promote ethical trading. Celebrating two enormous decades of impactful work, the Kawalawalanj: Warmun Art 20th Anniversary party is free and open to all. Start planning your northern WA journey for the end of this month: it’s a two-day celebration on 26-27 October with a full program of Gija culture.

In WA and SA, work is underway to strengthen the public and independent gallery sector and promote touring. Art on the Move and Art Gallery WA are embarking on sector mapping research in WA to understand needs and work collectively. Our WA sector roundtable earlier this year has been invaluable in informing NAVA’s state knowledge, and I’m looking forward to our next steps together. SA’s recent Public Galleries Forum was presented by the Regional Galleries Association of SA and Museums and Galleries (SA), bringing together galleries from all over the state as well as other state and national advocates including NAVA to determine a set of action priorities.

Victoria of course is closest to my heart. My previous home was the entire state of Victoria during my five years at Regional Arts Victoria. I’ve been moved and deeply changed by live art in Castlemaine, experimental film in Daylesford, silo work and other work of scale in Benalla, massive portraiture in Sale, CACD work in Kaniva, galleries such as Shepparton, Warrnambool, Latrobe, TarraWarra and Wangaratta, festivals such as Nati Frinj and Palimpsest, and of course the audacity of the Small Town Transformations artists in Avoca, the Bass Coast Waterline Townships, Birregurra, Dookie, Girgarre, Lake Tyers Beach, Narrawong, Natimuk, Neerim South, Ouyen and Rainbow.

As our own Queensland project work draws to a close, we’ll be looking closely at this new model before proposing our next ideas. Since 2016, Carley Commens and then Sophie Chapman have coordinated a diverse range of NAVA QLD projects and collaborations including the Blak Curatorial Exchange in partnership with BlakLash, the Independent Publishing Now forum in partnership with Tess Maunder and Museum of Brisbane, the ARI Mentoring Program in partnership with Cut Thumb ARI, and a range of workshops and roundtables. We thank Sophie and Carley for their outstanding work, and also a huge thanks to Arts Queensland and Flying Arts for the partnerships that made this work possible. With thanks to Create NSW, we’ve also been able to present workshops and events across regional NSW, with Laura Pike travelling extensively across the state. As we plan our next steps, Artlands will be an important time of national focus for considering how best to focus NAVA’s next regional projects in Queensland, NSW, and far beyond.

Artlands is the national regional arts gathering. The event travels across the country every other year and was last presented by Regional Arts Victoria in Horsham, back in 2004. Since then it’s been to Mackay, Alice Springs, Launceston, Goolwa, Kalgoorlie-Boulder and then to Dubbo in 2016. Creative Producer Ros Abercrombie is one of Australia’s leading thinkers on the role of festivals in creating places of meaningful connection, and her curation has been strongly informed by the Dja Dja Wurrung Country Plan and her relationship with Elders. This will be my fourth Artlands and I’ll be participating in two sessions: a panel on the City of Greater Bendigo’s Arts and Creative Industries Strategy, on which I’ve been consulting, and a workshop on ambitious and fair gallery practice, for which we need your voice. Register for Artlands here and join us in Bendigo and Castlemaine on 10-14 October.

The momentum that Artlands Dubbo created has inspired Regional Arts NSW to continue its large-scale gatherings, and so last year’s Artstate Lismore began a four-year program of annual events, with Artstate Bathurst the second one. Held on 1-4 November, registrations are now open, and our NAVA event is on the Saturday afternoon at Bathurst Regional Art Gallery.

At both Artlands and Artstate, we’ll be hosting sessions that continue the ongoing conversations kick started by Future/Forward and feeding into our work on updating the Code of Practice. How are Indigenous and non-Indigenous regional artists living and working? What is unique about regional artistic practice? How is regional gallery practice evolving? How is a curatorial balance struck between the presentation of local, national and international artists? How best should NAVA advocate for regional artists and contemporary practice? Please join us for these discussions, both offline and on, and let’s champion regional arts.