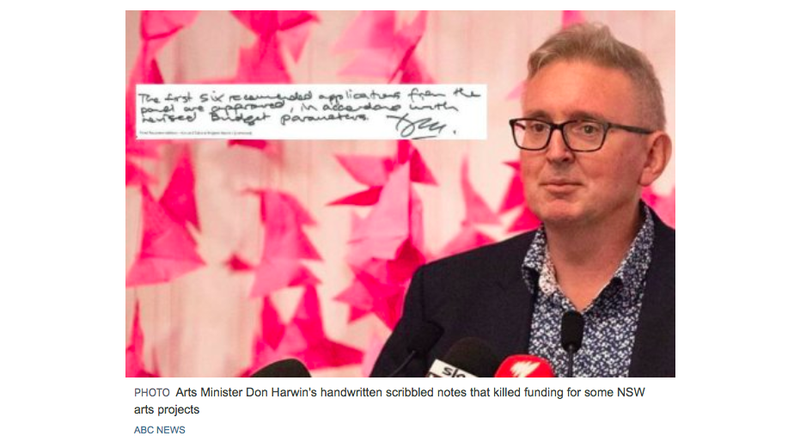 NAVA today expressed alarm at the news that money was taken from a NSW Government fund intended for independent artists, and redirected towards an unspecified “special project”, as published in an exclusive piece by the ABC’s Michaela Boland using documents obtained via a Freedom of Information request.

The revelation concerns Round 2 of the Create NSW Arts & Cultural Projects fund which was the focus of the 24 July arts industry statement in which NAVA was joined by 64 colleague organisations from all over Australia in raising the alarm: with 222 applications made and only 6 projects funded at a success rate of 2.7%, this was among the poorest funding outcomes in Australian history, prompting serious questions about where the money had gone.

“It’s even worse than what had concerned us all back in July,” said Esther Anatolitis, Executive Director. “Public investment has been taken away from artists and audiences across inner and Western Sydney and regional NSW, and instead it’s gone towards some secret project that wasn’t even disclosed through a journalist’s FOI research. In fact, the Minister confirmed in Parliament after questioning this afternoon that that “special project” was the compensation of a colleague organisation for operational costs, and not an artistic project at all.

“Let’s be clear: artists have earned this money – they’ve earned it through the hard work it took to reach the professional standing that made them such outstanding applicants, and they’ve also earned it by putting hundreds of hours into participating in this highly competitive funding process.

“Taxpayers will rightly be wondering why public funds earned by artists have not ended up where the transparent process of peer review intended.

“I commend the ethics and the rigour of Create NSW’s response to the redirection request – we see this in the email correspondence that’s now been made public. Seeing a senior Create NSW staff member’s “concern that funding decisions are being politicised” should have been enough for the Minister to halt the attempt.

“By all means, Create NSW’s capacity to fund “special projects” should be championed by the Minister – and bolstered by special funding. Taking money away from artists who’ve been independently assessed as successful grant applicants is an unacceptable way to reallocate taxpayers’ money. Funds intended for artistic projects that instead compensate others for operational losses rob our state of the artistic ambition we admire and applaud.

“NAVA calls for the prompt return of these public funds to the artists who’ve earned them. NSW audiences deserve to experience what our state’s finest artists have worked so hard for us to enjoy.”