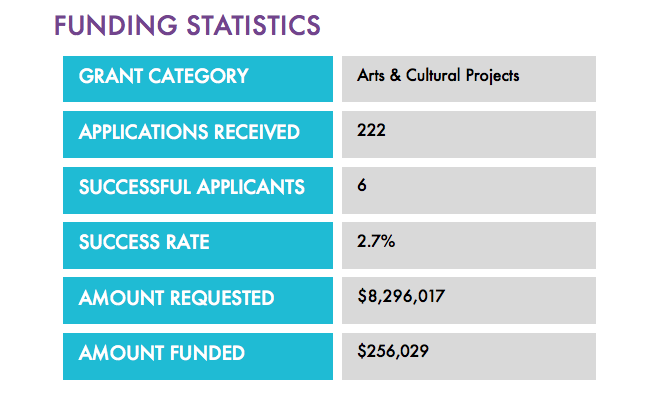 NSW’s leading arts organisations today share their grave concerns for the future of the state’s arts sector, following the shock announcement that Round 2 of the Create NSW Arts & Cultural Projects fund had a success rate of 2.7%, among the lowest in Australian history.

Organisations representing artists, festivals, galleries, venues and sector development across all artforms and from all over the state congratulate the six project teams, and highlight the detrimental impact of under funding a sector that contributes significantly to the culture and the economic viability of NSW.

While the arts and culture sector contributes $16.3bn to the Gross State Product, the PWC report shows that the NSW Government spend on arts and cultural activity is lower than other comparable state governments. In 2016/17 NSW spent $18 per capita, while Victoria spent $22.90 and Queensland spent $33.80. For every $1 invested in arts and culture, $1.88 is generated for the NSW economy. Yet the NSW Government’s arts and cultural budget represents only 0.9% of the total NSW budget spend (on 2016/17 figures). With such low funding and so few successful projects across the state, artists will begin exercising the choice to base themselves elsewhere.

With only one regional project funded, the viability of artistic practice and touring beyond our cities is also a major concern. Create NSW’s $100m Regional Cultural Fund invests in infrastructure, and we urge the NSW Government to make similarly ambitious investment in the creation and presentation of new work in our regions.

Managing expectations is essential for effective industry development programs. A grant round that can support only 2.7% of applicants places undue pressure on the entire sector, with 222 application teams representing a significant proportion of NSW’s practitioners and organisations. Recognising that each such application takes weeks to complete, this unproductive workload jeopardises capacity and creative potential all over the state.

A grant round that awards only $256,029 invests less in NSW’s creative capacity than it costs Create NSW to administer. The dedicated work of several staff working across many months is required to run a high-quality applications process, present information sessions across the state, handle all 222 applications, run the selection process, pay independent assessors, advise outcomes, administer contracts and then announce. Success rates of 15-30% are typical of arts funding rounds, which makes 2.7% one of the lowest outcomes in Australian history, with many artistic projects of excellence having missed out on being experienced by audiences in NSW.

Round 2 of the Create NSW Arts and Cultural Projects fund opened on 30 October 2017 and closed on 11 December 2017. Announcements were due in April 2018 for projects to start from 1 May 2018. On 29 May 2018, four of the state’s key sector service organisations made a joint statement of concern over the announcement delay which jeopardised successful projects. The outcome was announced last week, four weeks after that statement. Delayed announcements jeopardise successfully funded projects as well as their potential to be presented regionally. At this stage, very few if any NSW works will be able to tour to NSW professional venues in 2019, to the detriment of regional communities across the state.

According to Australia Council research, 98% of NSW residents engage with the arts. NSW is home to leading Australian artists and cultural organisations. Together, we attract a combined visitor attendance of over 16 million people per year, and manage NSW cultural institutions, collections and buildings valued at over $10.6bn. This work is essential to NSW’s economic sustainability and significantly underpins the state’s AAA rating.

The NSW arts sector is committed to nurturing an arts ecology that’s generative, ambitious and fair. The NSW Government is essential to our work in dedicating public funds to programs that support artistic practice and audiences across the state in confident ways. Our organisations work closely with government to advise the formation of policy and programs that best support the sector.

Create NSW is currently engaged in a planning process to develop its next arts strategy, Arts 2025, which began with a Summit event in March. The Create NSW Arts & Cultural Development Program offers competitive multi-year organisational funding and professional development grants as well as project funding, and has an overall budget of $52.7m. Within that program, last year Round One of the Arts & Cultural Projects fund granted $886,341 to 23 projects with a success rate of 17%. Project funding is where NSW’s most impactful creative ideas emerge through new work. Without a significant increase in investment in the Arts & Cultural Projects fund and across the Arts & Cultural Development Program, the success of Arts 2025 is perilously undermined.

NSW Minister for the Arts Don Harwin shares our passion for the arts and understands how essential the sector is to the vision that powers this state. As the Minister leads the development of NSW’s next arts policy, it will be vital that his parliamentary colleagues support him in committing to the arts ambitiously. With the state election approaching, we call upon all parties to present their vision for a NSW whose artistic courage leads the nation and inspires the world.

4A Centre for Contemporary Asian Art

Legs On The Wall