State of the arts: state by state

What does the state of Australia’s arts look like when we go state to state? How do they compare on policy positions and strategic directions that truly set artists at the centre? 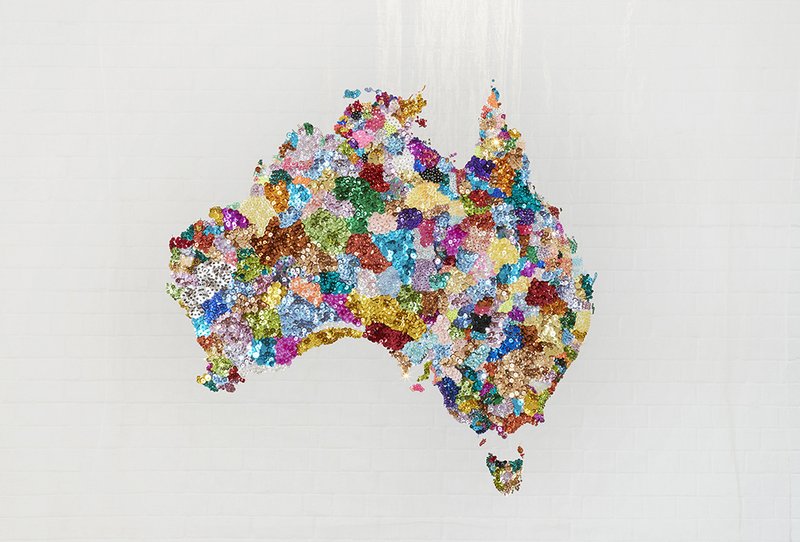 Image: Participatory community embroidery facilitated by Liam Benson, You and Me, 2013-2017, glass seed and bugle beads, sequins, cotton, organza, steel, 132 x 223cm. Image courtesy of the Artist and the collection of the Museum of Contemporary Art Australia. Photograph by Zan Wimberley.

Taking a look across the country, and also across the ditch, we see that the role of the artist varies considerably in each government’s understanding of arts and cultural policy.

Both South Australia and Queensland are about to release new arts strategies: in SA it’s Arts Plan 2019-2024, the state’s first arts strategy in two decades, and in QLD, the Ten-Year Roadmap for the Arts, Cultural and Creative Sector. Victoria is refreshing its creative industries strategy with a collaborative approach as extensive as the consultations which led to the current strategy, which was the first in Australia to adopt the creative industries approach. Victoria also issues a detailed Progress Report on the strategy’s key measures, including what the state has achieved for artists by investing in their time, career development and ideas.

Western Australia is currently assessing the next cycle of multi-year organisational investments in the context of their 2016 Strategic Plan. Alongside this, the state’s Arts Leadership Group created a fifteen-year Strategic Directions Framework and while their relationship to the WA Government is advisory, the Group proposed the only cultural policy in Australia to explicitly address urgent issues such as climate emergency and population growth as cultural issues where artists can effect change.

ACT’s 2015 policy is due for a refresh and working comprehensively in the meantime, while the Northern Territory lacks a strategy but offers a range of funding programs. As with WA’s Chamber of Arts & Culture, the NT’s Chamber of Commerce is becoming an active cultural contributor: they’ve got a survey out right now on the development of an NT Creative Industries Strategy. Tasmania, whose Cultural & Creative Industries Strategy 2016-2018 is also due a refresh, remains the only state to mandate fair artist payment at industry standards.

And NSW, having announced a strategic development process last year, has not yet released a plan, but recently announced a new funding framework and artform board structure. In the new model, artistic projects compete with infrastructure applications in one and the same uncapped round, making it likely the only government arts funding agency in the world without dedicated funding for artistic projects. Create NSW have assured NAVA that this model is being rolled out on a pilot basis over two rounds across the next twelve months, and that all feedback is welcome.

Meanwhile, the New Zealand Government has just released its latest Statement of Intent / Tauākī Whakamaunga Atu to articulate the value of the arts for everyone. The statement is aligned to the nation’s highest goal of “raising the living standards of all New Zealanders” with an explicit “public value model” that incorporates advocacy and leadership. It’s a document of ten-year scope and like the Australia Council’s current draft strategy, it includes “a stronger arts sector” among its goals.

Visual artists, designers, curators and other contemporary artists present work in gallery, public or unexpected spaces. Their expectation of arts and cultural policy is that it will value, champion and expertly support their work, which is generally presented free of charge to the public. While creative industries approaches have tended to focus on the creator as entrepreneurial individual, more comprehensive approaches to industry development have been eschewed, and Australian research is needed to evidence (or hopefully contradict) artist and collegiate concerns on how the cultural sector has contracted during this time.

As far back as 2006, in critiquing the UK’s creative industries approach on which Victoria’s was modelled, Nicholas Garnham argued for “a return to an artist‐centred, supply side defence” of arts investment to temper unrealistic expectations of creative industries’ impacts. While employment in the creative industries has grown, as Stuart Cunningham sets out, the Australia Council’s longitudinal research shows that artists incomes and career prospects are diminishing. We need to understand what’s at stake when the relationship between artists’ careers and the creative economy is not sufficiently articulated in policy, strategy or program. This is particularly crucial for understanding the impacts of Australia’s most quarantined funding framework.

As various Australian government bodies develop their next arts and cultural strategies, opportunity abounds to look closely at the role of the artist. We hear what’s at stake for artists in NAVA’s latest podcast with Connie Anthes and Rebecca Gallo of Make or Break.