With the recent release of the publication Agenda for Australian Craft and Design Tamara Winikoff discusses the perception of craft in recent years, a brief rundown of the National Craft Initiative and steps to ensure the future of a sustainable craft sector in Australia. 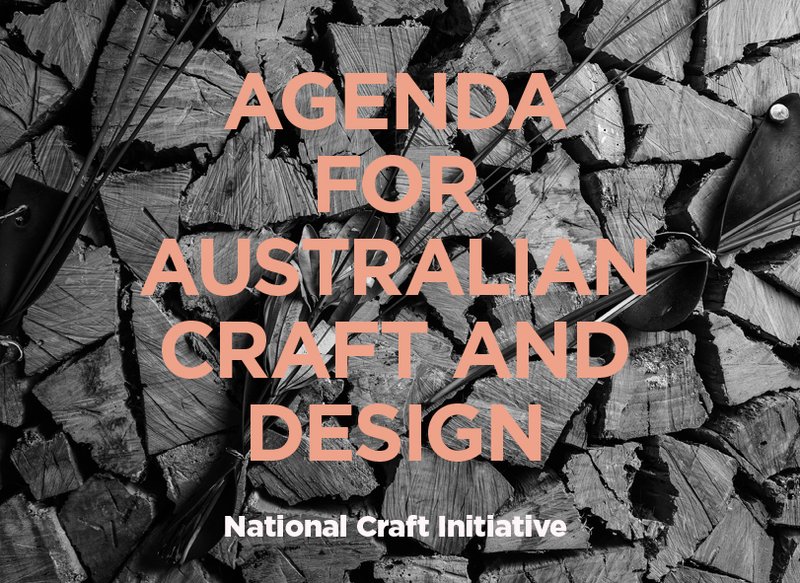 I have a tree with a colourful knitted trunk warmer in my street. It cracks me up every day as I walk to and from the train station. My local feral knitters are just one manifestation of the inventiveness and sometimes larrikin humour of Australian craft makers. With around 2 million Australian adults and 1.2 million kids participating, there can be little doubt about the continuing enjoyment afforded by this form of cultural activity. In fact, the ABS estimates that one in five Australians engage in creating visual arts and craft [1]. It is the most popular of all forms of creative activity.

However, fashions come and go and despite having a long and illustrious history, the crafts have felt themselves over more recent decades to be under-appreciated by the arts establishment. While the community has an appetite for high quality craft and design, sometimes professional practitioners have difficulty in being regarded with the same seriousness as contemporary art practitioners who work in the mediums of painting, media art, sculpture and installation. This seems out of step with the diversification of mediums and processes employed by artists and the interdisciplinary nature of contemporary practice across all art forms.

Professional craft and design practitioners form a substantial proportion of the National Association for the Visual Arts (NAVA)’s constituency. While NAVA has been taking various steps to advocate for and foster the careers of these professional practitioners and their support organisations, it was felt that this sector needed more concerted attention. in 2012 NAVA forged a formal partnership with the network of Australian Craft and Design Centres (ACDC) in a three-year major project, the National Craft Initiative funded by the Australia Council. This followed the Visual Arts Board of the Council’s decision to defund Craft Australia, which had been the peak body representing and servicing the needs of the Australian craft sector. This community was left bereft and wanted to explore how to make up the shortfall and move in new directions.

Over the period from 2013 to 2016, the ambitious National Craft Initiative (NCI) program delivered four major outcomes. Firstly, research was undertaken to gauge the health of the sector. A Mapping the Australian Craft and Design Sector report suggested that contemporary craft is facing a period of unusual turbulence characterised by both challenges and exciting opportunities. These include a recognition that technological change impacts on handmade approaches to craft objects, methods of production and distribution; the increasing applications of craft and design within other industries provides them with new innovative directions; and there are increasing international opportunities for Australian craft and design practitioners including collaboration and exchange. However, it also observed that over recent years there has been a widespread threat to atelier-based, tertiary craft courses both in university-based art schools and vocational education, which requires urgent attention.

This research was followed by a partnership between NCI and the National Gallery of Victoria (NGV), to generate informed and insightful discussion. NCI felt that the NGV was an absolutely appropriate partner because of their leading role in establishing a department of Contemporary Design and Architecture with an ambitious program of exhibitions and major events. Together, in September 2015 they presented Parallels – Journeys into Contemporary Making, an international conference exploring the new cultural and commercial landscape for contemporary making. Several world-leading speakers from Australia and overseas shared stories of their initiatives and articulated how they saw local and global forces opening up new opportunities and reshaping the parallel and convergent worlds of craft and design.

The third outcome of NCI’s work was the expansion of NAVA’s Code of Practice for the Professional Australian Visual Arts, Craft and Design Sector to include new best practice standards. These recognised the particular nature of craft and design practice and the requirements for protection, especially in the area of intellectual property. It is evident that there is a lack of adequate regulation in Australia to prevent cheap replicas of Australian designs being freely sold by retailers. NAVA will be partnering with the Australian Design Alliance to press for new legislation to protect creators against the appropriation of their intellectual property which threatens their livelihood and undermines their professional reputation.

Finally, April 2016 saw the launch of a ‘where to from here’ document which set out goals and strategies for the future. The Agenda for Australian Craft and Design makes recommendations for action which provide a blueprint for all parties including governments, key organisations and enterprises and practitioners themselves. Some of the proposals are to: embrace interdisciplinary practice and support entrepreneurism; develop new platforms and models for international engagement, exchange and export; and position Australia as a key hub in the Asia-Pacific context.

Now NAVA and ACDC will be taking up this challenge and seeking ways to implement the findings from all this work. We know that change is best made when artists are motivated to become ‘participatory citizens’ and engage with the formation of policies and strategic action themselves. Drawing on its advocacy experience, NAVA will be creating new self help resources and offering national coordination assistance to help make change a shared reality.