To Fee or Not to Fee

Tamara Winikoff reports from the recent Brisbane Fair Pay for Artists consultation roundtable in the next phase of NAVA's campaign. 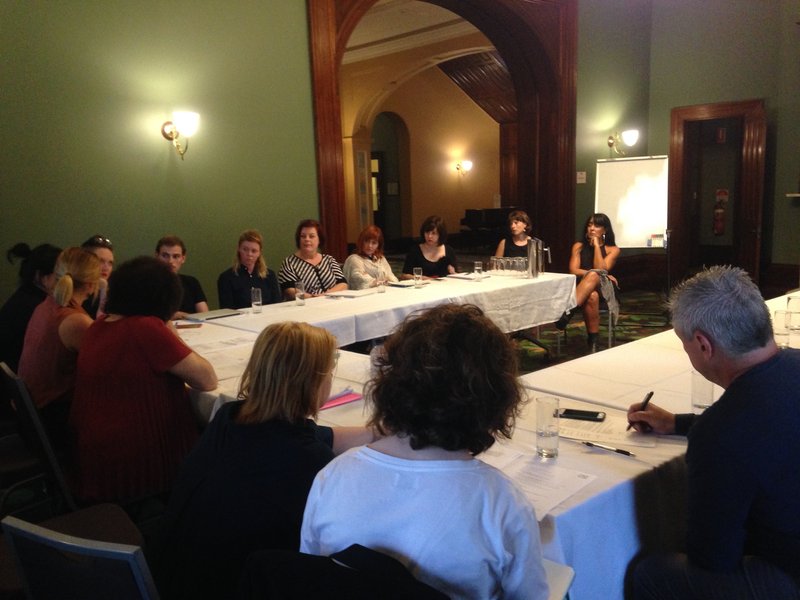 Is it fair that artists should be asked to work for free whilst everyone around them is being paid? Is it justified for galleries to operate on the basis that offering the opportunity for artists to have their work exhibited is a sufficient reward in itself? These are two of a series of questions NAVA asked a group of Brisbane-based artists, gallery staff and curators at all levels, ARI directors, academics and magazine editors who attended NAVA’s ‘Fair Pay for Artists’ consultation roundtable in Brisbane last week.

There was no disagreement with the proposal that artists deserve to be acknowledged for the time, intellect, labour and skill that they expend in creating works and making them available to the public through exhibitions. However, those running art spaces spoke of the difficulty they saw of having to choose between meeting the best practice standards for our industry by paying fees and superannuation thus increasing the cost of staging a show, or not paying and giving more artists the opportunity to exhibit their work and be seen by audiences.

There was mixed opinion about the level of fees in NAVA’s Code of Practice for the Professional Australian Visual Arts, Craft and Design Sector, largely based on the challenge that is endemic across the sector to try to do more and more with less and less. A recommendation made was that a more nuanced graduated payment scale could be devised which was based on galleries’ budgets though it was acknowledged that this would never be countenanced by other service providers.

While acknowledging the budget pressures on galleries, NAVA took the strong position that industrial fairness demands that artists be paid for their work like any other professional. Artists pointed to the power imbalance and said that they currently felt nervous about endangering their relationship with galleries by having to ask that fees be paid. NAVA asserted that the enterprise of presenting art to the public must not be predicated on exploitation. Rather than accepting the status quo, a united arts sector needs to take on the challenge of bringing the arts in line with general industrial standards of remuneration for work.

There was support for NAVA’s call for the federal government (possibly matched by the states) to allocate $5 million a year for an Artists Fees Fund to help underfunded small to medium galleries to meet the industry standard. Galleries said it should be assessed on the basis of the degree of need. Artists asserted that the distribution process should not cream off large administration fees or be too bureaucratic.

Roundtable attendees felt that the pay level for other art professionals also deserved attention. This was supported by NAVA’s recently launched research report ‘S2Ms: the economics of Australia’s small-to-medium visual arts sector’ which found that the increased pressures of diminishing levels of funding and increasing expectations have seen declining numbers of full time arts professionals and the casualisation of the sector’s workforce. The report found that “arts professionals are paid a fraction of average earnings, generally well below recommended industry rates”. The report also revealed that 70% of contemporary art is produced and distributed by ARIs which run largely on a volunteer based economy.

Both those at NAVA’s Brisbane roundtable and at the one held earlier in the month in Adelaide supported the campaign’s call for all funding bodies to adopt as a condition of grants, the mandatory requirement for all successful grant recipients to pay artists’ fees at least at the rate recommended in the NAVA Code of Practice. This would apply if artists’ work is commissioned or loaned for exhibition in public galleries or at events when the work is not made available for sale.

Everyone has agreed that the fees campaign is a timely conversation and the sector needs to be educated to work together on the adoption of fair and ethical standards. NAVA will consult in other states to encourage involvement around the country. A proposal has been sent by NAVA for discussion at the Meeting of Cultural Ministers’ Officials being held on 31st March in Brisbane, asking for fees to be mandated and governments to support this with new funding of $5 million/year.

You can support NAVA’s Fair Pay for Artists campaign by signing the petition here.