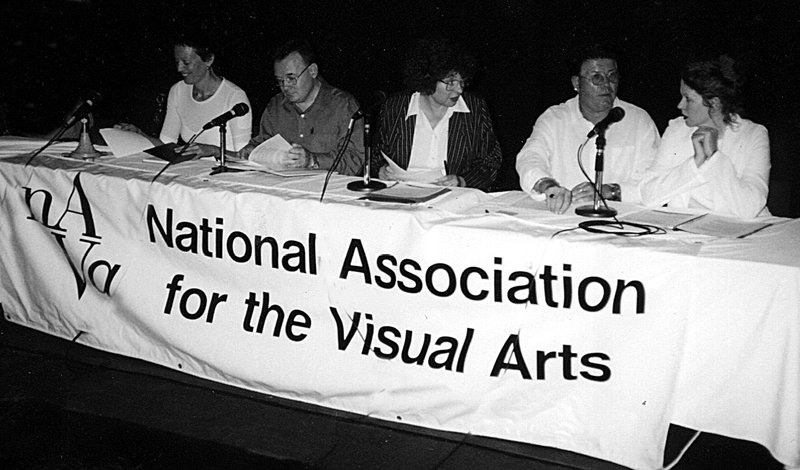 Over its whole history, NAVA has been a potent advocate for the Australian visual arts sector. Most recently, from 2014-15, we conducted a major campaign against the Federal Government’s cuts to the arts budget and lack of an arts policy and and sent key ideas to all political parties. In collaboration with two other lead bodies, NAVA secured a Senate Inquiry into the impact of these cuts, advocated for arts policy to be on the 2016 election agenda and partnered in a National Day of Action for the Arts and the Arts Election Debate.

The campaigns NAVA runs are intended to improve the working environment for artists and arts organisations, but can often take many years. Currently, Fair Pay for Artists is seeking to have a $5 million Artists Fees Fund established and to make it mandatory for artists to be paid fees at least at the minimum rates recommended for our industry in the Code of Practice. It also addresses superannuation and income supplement issues.

This year NAVA published S2M: The economics of Australia’s small-to-medium visual arts sector a report commissioned from consultants Economists at Large. The report makes 14 recommendations for actions needed to build the strength of the visual arts ecosystem. It is the first comprehensive study of the Australian S2M visual arts sector undertaken since the 2002 Contemporary Visual Arts and Craft Inquiry (Myer Inquiry).

Our previous successes include the introduction the Artists’ Resale Royalty legislated in 2010 after over 20 years of campaigning by NAVA in alliance with some other peak arts and copyright bodies.

In 2005, after 8 years of negotiation NAVA secured the ATO Taxation Ruling: Income tax: carrying on business as a professional artist (TR 2005/1 which uses art industry standards rather than just profits to assess artists’ income tax entitlements.

In 2000, Moral Rights legislation was introduced as a result of NAVA’s successful lobbying in collaboration with other arts industry bodies.

We were also one of the leaders of a successful campaign to change Sedition clauses in the Anti-Terrorism Act 2005, to protect artists’ freedom of expression. In 2011 it was replaced by ‘Urging Violence’ in the National Security Legislation Amendment Bill 2010.

NAVA takes a leadership role in facilitating both the development of sections of our industry as well as the arts industry as a whole.

We successfully lobbied the Federal Government to undertake the Inquiry into the Contemporary Visual Arts and Craft Sector (the Myer Inquiry) which resulted in 2002 in the Visual Arts and Craft Strategy, delivering around $12 million a year in additional funding from federal and state/territory governments to assist artists and small to medium arts organisations.

In 1999, NAVA co-founded and became co-convenor of ArtsPeak, the confederation of Australian national peak arts organisations and state arts industry councils which continues to the present.

In 2001, NAVA formed the National Visual Arts, Craft and Design Network with representatives from all parts of the art industry as an advocacy and consultative group.

NAVA appointed an Indigenous Arts Officer who in 1996, facilitated the establishment of the National Indigenous Arts and Cultural Alliance which successfully lobbied ATSIC to maintain its funding for Indigenous arts and culture.

Periodically, NAVA brings the sector together to exchange views and hear new ideas. As examples, in 20014 NAVA held Future/Forward the first national Visual Arts Summit for Australia and in 2011, organised We Are Here, a 4-day major international event held for Artist Run Initiatives from around Australia in partnership with First Draft.

In 2013, at its 30th anniversary event at Parliament House Canberra, NAVA launched its National Agenda for the Visual Arts in the presence of the Governor-General of the Commonwealth of Australia and the then Arts Minister.

NAVA undertook 4 years of research funded by the Australian Research Council and Australia Council on the Visual Arts Industry Guidelines Research Project (in partnership with the University of Sydney’s Power Institute of Art and Visual Culture and Australian Centre for Industrial Relations Research & Training and Macquarie University’s Department of Economics, Art Gallery of NSW and Simpsons Solicitors).

A major outcome was The Code of Practice for the Professional Australian Visual Arts, Craft and Design Sector which sets best practice standards for the industry. It is regularly updated and has been used as a model to produce a similar Code for Canada and South Africa.

Another 2 years of research resulted in production of Valuing Art, Respecting Culture: Protocols for Working with the Indigenous Australian Visual Arts and Craft Sector written by Doreen Mellor and Terri Janke.

It has been a highly productive 22 years but there is so much more still to do.