Rethinking the advocacy challenge: what comes after Arts Day on the Hill?

A week in Canberra meeting MPs back-to-back after two days of advocacy workshops proves to be a transformative experience – not just for the artists, but also, for the parliamentarians themselves. 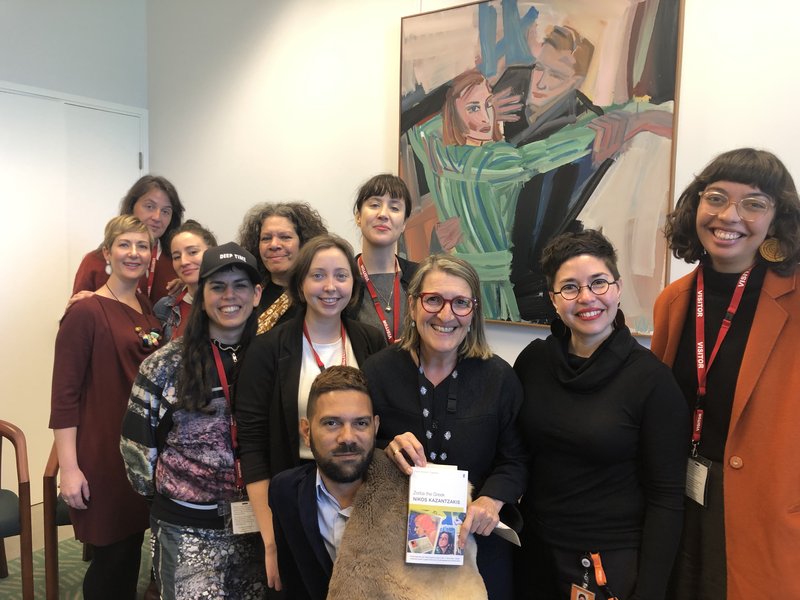 This is the heart of the nation. Here – on what they call Capitol Hill. My family called it Currajong Hill. A place of knowledge, where my great-grandfather, and his people, had been  for thousands of years…

The creative capacity and creative inheritance… For me, it’s very important that… [Indigenous and migrant] stories and artwork form part of our mainstream Australian histories, Australian stories, and Australian art and creative expression… We’re looking forward to doing some serious work in progressing this… and making a mark.

Unlike what you see at Question Time, the great majority of us get along very very well, and work productively! … I am so happy to have these two portraits of two of my heroes, and [division bells ring] and we have to go now [laughter], so I’ll make this short, and that makes it better!

– Paul Fletcher, Minister for the Arts

Thank you, to those of you who are artists, for what you do… In Australia generally, we’ve lost the capacity in almost every policy discussion or debate to deal with something being beautiful, to deal with something touching your soul… Your work as visual artists: you take control from that first glance… Please keep engaging with this building. We don’t just respect and appreciate what you do – we need what you do.

Last month’s launch of Arts Day on the Hill was the first ever event of the new Parliamentary Friendship Group for Contemporary Arts & Culture. Speaking at Parliament House to a roomful of artists and arts leaders, Aunty Matilda led each Member of Parliament in recognising the centrality of culture to the place where we gathered, and to the life of the nation.

The Arts Day of the Hill Advocates had just spent two days in workshops at the NGA, the Museum of Australian Democracy and Parliament House, hearing regional, national and global perspectives on arts and cultural policy, as well as looking at advocacy in Australia today and the role of communities, public institutions, the media, government, parliamentarians – and artists. We kept up that pace over the two days that followed, meeting 18 MPs across a range of parties to secure their long-term commitment to effective arts policy that survives a change of government.

Together, we worked out our top three issues or our ‘three killer points’: putting First Nations first by championing and fully funding NIACA; investing ambitiously and strategically across all artforms through an Artistic Investment Framework that includes VACS; fair pay for artists by making industry standard pay a condition of all public funding. And that was just our starting point; we delved into a lot more specifics around a range of urgent issues including superannuation reforms, cultural tourism and education.

The most consistent thing the Arts Day of the Hill Advocates were told, repeatedly, by MPs of all stripes, was that this was the first time they’d had arts people in their office. That they never hear about the arts from their constituents, or in their electorate. That nobody is raising the problems with them, nor the urgent need for change, nor what they can contribute.

This was eye-opening for our Advocates – and deeply concerning. The practice and sector development needs of an entire industry are unknown to the majority of our parliamentarians. The policy and investment changes since 2015; their abrupt nature, implemented without justification, research nor impact modelling; the decline in artists’ incomes and career prospects that’s followed; the collapse in the commercial gallery market since the changes to how self-managed super funds understand investment in artworks; the massive disparity in public investment among specific artforms; the decline of arts education at a time when creative and critical thinking skills are in high demand; none of these issues are comprehensively understood across the parliament – and our political decision-makers are keen to know why.

The arts-practising, arts-loving population is massive – 98% of Australians, according to Australia Council research – and yet the Australian Parliament isn’t hearing about what’s at stake when artists can’t sustain careers because their incomes, pathways and rights are dwindling.

Of course, NAVA’s been hearing this for many, many years – thus our Advocacy Toolkits, Election Report Cards and all of our other guides on taking action right now – but to hear MP after MP say so was illuminating for our Advocates. It seems so simple, they said, and it’s easy to be suspicious about the impact it can have, but it’s needed precisely because it is simple and it is impactful.

The question of how to sustain engagement beyond our communities is a fraught one. The Australian Council of University Art & Design Schools has identified engagement as the theme of its 2019 conference – engagement “across disciplines, nationalities and cultures; but also with industries, communities and the world at large”. How best to demonstrate value without instrumentalising creativity, they ask? How can the academy sustain a critical commentary on society without jeopardising rewards and resources? Put 31 October – 1 November in your calendar to join ACUADS for this Melbourne conference, at which Esther Anatolitis will present a keynote. Let’s find those answers together.