Claire Bridge and Chelle Destefano, What I Wish I'd Told You, 2020 with Haley Martin, Worimi and Daingatti woman, Too Loud, multi-channel video (video stills) 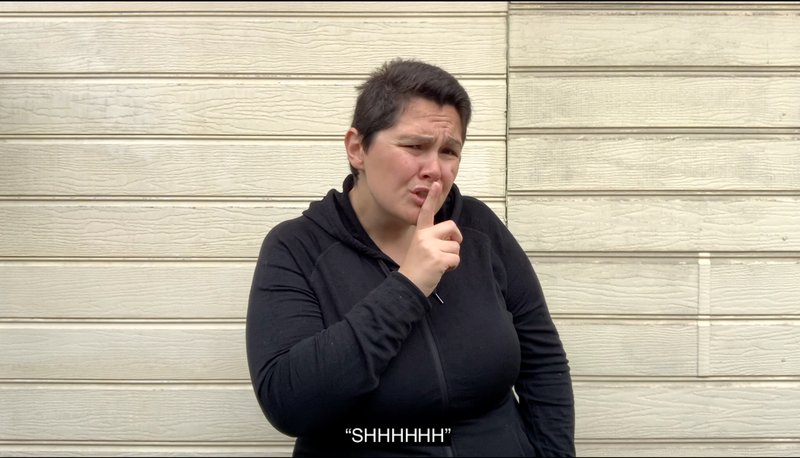 Image description: Video still of a squinting person with short dark brown hair, wearing a black hoodie, holding a finger to their lips in a shushing gesture. Behind them is a pale yellow wooden wall. White text in quotation marks bottom centre reads "SHHHHHH".

A week ago, The Daily Telegraph published a front-page article criticising public funding for the arts during a pandemic. One of five female artists named and ridiculed as self-indulgent in the article was Claire Bridge who received a $10,000 grant for a collaborative multi-channel video work with Chelle Destefano. Their project, What I wish I’d told you brings together Deaf voices and centres Deaf perspectives, language, culture and agency. This year, distancing and isolation has created a number of barriers to connection, especially for people living with disabilities who depend on face-to-face interaction and for whom community is vital. Bridge and Destefano’s project offers stories of hope, resilience, inspiration and empowerment. The artists were thrilled to receive financial support for this project and to promote it this week as part of Reaffirming Deaf People’s Human Rights, the theme of this year’s National Week of Deaf People and International Week of the Deaf, 19-25 September 2020. The disheartening comments made in the newspaper reiterate the value of this type of artwork.

Attacks on the arts sector from conservative media outlets repeatedly target what right-wing authors deem invaluable and unnecessary recipients of Australian taxpayer dollars. Artworks produced by public funding recipients (and notably in this case only women artists) are often highlighted as ‘objectionable’ due to controversial content – whether it be a critique of coal mining’s contribution to climate change, or an exploration of feminist and LGBTQIA+ issues – to incite public debate over social values.

Needless to say, a major flaw in The Daily Telegraph article is that it is laden with sensationalised untruths about what the arts grants are being used for, taking words from the artists’ bios or statements from their other works out of context. By simplifying and altering artists’ intentions, the article opened them up to public ridicule, as evidenced by the readers’ comments. The funds allocated to many of the named artists were in fact COVID-19 emergency-relief grants in the context of financial hardship, largely due the loss of billions of dollars in expected self-generated income across the industry. The situation for the sector is all the more alarming now, given a great deal of the arts sector were not eligible for the various government subsidies. One of the grants brought to question provided funding of $2,000, which is equal to 3 weeks on JobKeeper, a program that roughly 6.6 million Australians have benefited from since April 2020.

A common argument from conservatives is that publicly-funded artists take unnecessarily from the ‘average Australian’. In the current international crisis, this argument fails to recognise that artists and arts workers are just as deeply impacted financially by COVID-19 as the ‘average Australian’ in other industries. Data released from the Australian Bureau of Statistics (ABS) in April showed that the Arts and Recreation sector has been the hardest hit by the Coronavirus pandemic with more than half (53%) of businesses ceasing to operate.

Art can offer us a deep perspective on the past, a vital perspective on today, and a compelling perspective on the future. The contemporary arts offer rigorous, ethical and valuable approaches to rethinking our personal, social, environmental and political priorities. Art, whether while creating, observing or engaging with, can also make us happy. Particularly in times of crisis, people turn to the arts for support, community, entertainment, comfort and inspiration. During the pandemic, 73% of Australians have said that the arts have improved their mood and quality of life. Since the pandemic, the number of Australians who believe that arts and culture should receive more public funding has only increased. These figures all suggest that comprehensive public investment in arts and culture is in the public’s interest.

The false, but nonetheless popular argument that arts and culture contributes nothing to the economy is made repeatedly in public discourse. In Australia there are 48,000 practising professional artists, 57,477 people employed in the arts, and 600,000 people employed in the broader $111.7bn cultural and creative activity sector. The arts and cultural sector is a bigger industry than agriculture, and employs more people than the oil and gas, and mining industries. For every million dollars in turnover, the arts and entertainment sector creates 9 jobs, as opposed to just 1 in mining or 0.36 in oil and gas extraction.

The central importance of the arts industry to the national economy is stressed further when you consider its intrinsic relationship with tourism, accommodation and hospitality. These industries rely on arts and culture for their own success, especially in regional areas. What’s more, arts tourists are high value tourists: they travel further, stay longer and spend more than domestic tourists overall.

And the sector is not without an engaged audience. New research from the Australia Council for the Arts has shown that prior to the pandemic, almost every Australian (98% of us) is engaging in the arts in some way, and 63% of Australians believe that arts and culture should be financially supported.

This is one of Australia’s most employment-intensive industries, with strong industry interdependencies with tourism, accommodation and hospitality. The Australia Institute argues that ‘in addition to the short-term welfare, cash flow and wage subsidy measures that have already been announced, the government also needs to provide ongoing support to the structure of the economy.’ They propose evaluating the efficacy of several potential stimulus projects according to 8 principles including targeting domestic production and those most impacted by the crisis. The creative industries align with every one of these principles. The Australia Institute goes on to reason that comprehensive investment in the creative industries will be an ‘effective form of short-term stimulus and potentially provide a source of creative assets of benefit for decades to come.’

Urgent and ambitious funding for the arts will be welcomed by audiences all over Australia. Yet in spite of the demonstrated preferences of ‘average Australians’, conservative commentators unrelentlessly insist that arts funding is not of value to Australians.

The fatigue felt by artists and arts workers in response to public discourse on the arts cannot be constrained to issues of money and funding alone. In between the mockery of conservative media personalities, and the increasingly results-oriented, quantitative approach that characterises public policy evaluation, the value of art is more often than not, discussed only in consideration of its financial potential.

Public debates on the contribution of the arts to the economy – or even public health – distract us from the possibilities of what art can offer: connection, understanding, political engagement, ways to hold things to account, to unpack and confront the social meanings and changes in our times, and imagine and welcome ideas and voices that are new, strange and exciting.

The true value of art cannot be measured in dollars and cents. Artistic creations engage passionately with the issues of the contemporary world and challenge our ways of life. An artwork can mean many different things to many different people and nearly always elicits a response. As Andrew Brooks reminded us in February 2020,

‘An artwork is not a riot or a strike or a blockade or a commune. And we must be careful not to forget that the future we desire will not be won in the gallery but in the streets and through collective struggle. But art is one of the primary means in which the structural conditions and inequalities that are produced by the infrastructures of the settler state can be revealed, analysed, and critiqued.’

Because expertise in the arts is not valued in the Australian media landscape, most people don’t hear about the arts from specialist journalists and news sites. Rather, the arts are routinely associated with deceptive and harmful stereotypes (such as the elitist taxpayer-funded bludger) and shrouded in misleading inaccuracy. The media’s antagonism towards the arts – when discussed at all – is one of the biggest hurdles preventing the arts from attracting larger audiences. The media could do with more people committed to meaningful conversations with the arts and culture sector – ones that challenge artists and arts workers to imagine new territories.