Ensuring good educational opportunities for visual artists is one of NAVA’s central concerns to enable artists to be well prepared to embark on and progress in their professional careers. Tertiary art schools are key to reaching this objective.

The Dawkins reforms in the early '90s saw art schools moved under the umbrella of universities and required to be more business like and set ‘performance targets’.

Levels of public funding stagnated and between 1995 and 2005 public investment in tertiary education in Australia increased by 0%.

After Voluntary Student Unionism (VSU) was introduced by the Howard government in 2006, universities were stripped of support services. In 2008, in an address to the Sir Robert Menzies Oration, the Hon Julia Gillard MP acknowledged that together with increasing student enrolment fees, the impact of this bill had diminished the quality of campus life resulting in low student satisfaction levels and a high drop-out rate.

Funding cuts to higher education have been driving program and campus closures or mergers across both the university and TAFE sector.

Australia’s university sector has been hit especially hard by the coronavirus crisis in 2020 without access to any of the Federal Government’s income support including JobKeeper.

In October 2020, the Job-Ready Graduates Bill was passed through the Senate which means fees for arts and humanities degrees will increase by 113 per cent.

The impact of this is that universities are facing enormous deficits and the fear that enrolments in the arts will drop due to the increase in fees. Sweeping cuts that are being made at all universities, targeting the arts and studio-based learning in particular.

There was a time when art schools were regarded as a thrilling hotbed of experimentation, bohemianism and great new anarchic ideas. But the gradual funding squeeze and the Dawkins reforms saw them moved under the umbrella of the universities and required to be more business like and set ‘performance targets’. What has been the consequence?

In May 2017 the Federal Government led by the Minister for Employment, Education and Training, Senator the Hon Simon Birmingham set up an Inquiry on how students are supported from school to work.

According to the Parliamentary website: “The inquiry will look at ways to ensure students are supported from school to work by measuring gain in schools and how this contributes to supporting students for post-school education and training. The inquiry will also look at opportunities to better inform students of appropriate post-school education and training using employment outcomes as a measure of course suitability.” You can read more about this Inquiry here.

NAVA has made a submission to this inquiry available here.

Don Lebler and Erica McWilliam, Aligning Curriculum, Pedagogy and Assessment for building creative capacity in undergraduate students: A Case Study from the Conservatorium, paper presented at the Creating Value: Between Commerce and Commons Conference, Brisbane 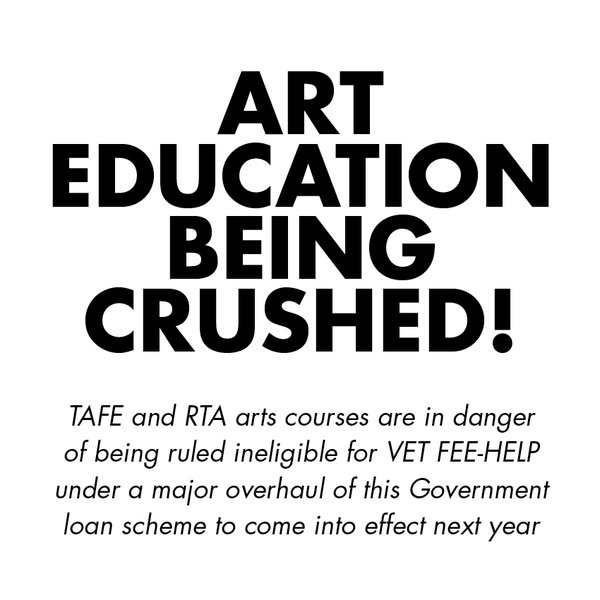 NAVA wrote an open letter to the Education Minister, Simon Birmingham in response to media reports that the majority of arts courses would be denied subsidy as part of the proposed major overhaul to the government's VET FEE-HELP Scheme, 26th August 2016. When this was officially confirmed, NAVA made a submission to the Education Minister regarding the proposed changes in late October 2016.

In November, NAVA took a delegation to Canberra to meet with the Minister and his adviser, the Arts Minister's adviser, Shadow Education Minister and the Australian Greens arts representative. We made the case for reinstating most art courses to be eligible for the renamed VET Student Loan Scheme. The delegation consisted of NAVA, members of the National Advocates for Arts Education (NAAE) and a highly reputable independent RTA. We were advised that the next opportunity for reconsideration would be mid-2017.

NAVA submission to the Education Minister re: changes to the VET Student Loan scheme, 27 October 2016

Cuts to government funding subsidy for arts courses in TAFEs started in 2012 causing a dramatic drop in enrolments and as a result, a the severe contraction of courses and staff around the country, the worst affected states being Victoria, New South Wales and Queensland.

In September 2012, the NSW government announced that it would stop subsidising art education in TAFE, leaving 4,000 students without access to finishing their courses in 2013, unless they could pay fees of around $6000 to $8000 per year.

A Senate Inquiry into the role of TAFE and its operations was called in early 2013 in response to cuts made to the subsidy of courses in the TAFE sector in several states.

NAVA made a submission to this inquiry.

Geoff Strong, TAFE cuts the end of the road for Ballarat arts school, The Age, 25 May 2012